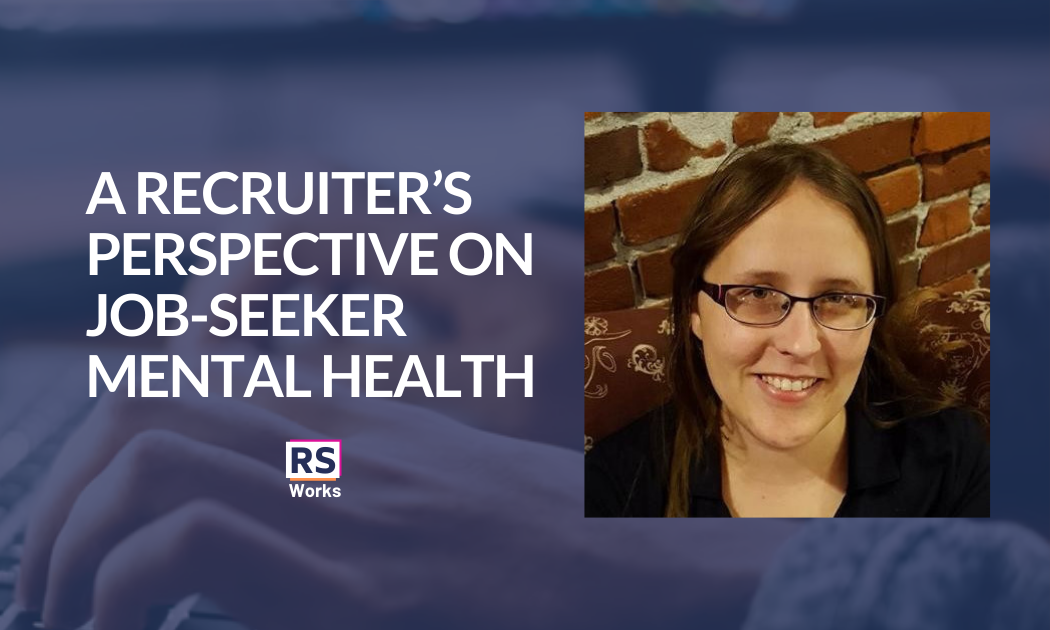 A conversation with Amy Wheeler, a Technical Recruiter who sources candidates for companies like HP. She shared how mental health issues have been coming up much more frequently since the pandemic started. She offers tips on how to notice these issues right off the bat, even if our clients may not initially disclose them. She offers insights on how to guide our clients as they return to work.

Andrea: Has working with job-seekers been different lately than usual?

Amy: Yes! In the past month alone, I’ve worked with about 12 people with mental health issues. I’ve been helping them to explain their spotty job histories while they were pursuing treatment and getting help.

Andrea: So you’ve been helping your clients to figure out how to explain mental-health related gaps, both in the resume and interview process?

Amy: Yes! How do you talk about it? But sometimes the questions is, how do you not talk about it. In a lot of job coaching roles, you may not want to draw attention to it.

Andrea: Interesting. So sometimes, you want to gloss over the employment gap and draw attention away from it. Have you ever worked with a client who wants to be more vocal about their mental health experience?

Amy: Yes! There was a really interesting conversation I had about two weeks ago about the ADA requirements of preventing discrimination against people with mental health barriers to employment. If you want the employer to not discriminate against a candidate, you need to communicate that they’re a good employee, mental health issues and all. But it’s this weird dichotomy, right? The person might have this really solid job history and a record of great performance, but then there’s the mental health issue that emerged. So you want to be transparent and truthful when talking to employers, but you also don’t want them to discriminate against someone who would be a great fit.

Amy: Right. Deciding if, how and when to talk about it. If we do talk about it, we want to show that they’ve grown, and that they are now in a better place.

Andrea: Interesting. I used to work, as a career counselor at a social service agency that served with people with severe mental illnesses. My clients were applying to or working in what was their first job after being homeless or incarcerated for a long time. I would visit the employer and be a mediator between the managers and the employee. We’d talk very openly about what was going on to find workable accommodations. This job required so much transparency. It was almost a luxury to have that kind of openness.

Andrea: There are some instances where you want to be vocal about what someone has gone through. You want to help the person to become an advocate, if they want to help improve the landscape for other people. But sometimes you don’t want to draw attention, and you want to gloss over it. So, we’re often looking at the pros and cons of both of these approaches.

Amy: Absolutely. The last two years have been rough on everyone’s mental health. So it’s a conversation that comes up a lot more than it did a year and a half ago.

Andrea: Is mental health advocacy a lens that you or your agency specialize in? Or does it just so happen that these issues have been coming up more recently?

Andrea: I wonder if they have a sense of you being more open or maybe being more aware of what to look for, to encourage vulnerability in the conversation?

Amy: There’s a lot of that. And when there’s a gap on the resume, you have to ask why. I think I see signs of what’s going under the surface more often than other counselors and recruiters do.

Andrea: So as you’re helping these people with their resumes, I’m wondering what kinds of strategies, if any, are you using to account for those gaps? Is that something that you’re helping them to think about?

Amy: Definitely. The first is sharing only the most relevant parts. During an interview, I might coach someone to say “I was having some health issues,” instead of going into more details about what was happening. The main thing is to emphasize that you are now well and ready to do the job. But also being very open about the support and structure you need to be successful, and working that into the questions you ask during the interview.

Andrea: So going into the job search really knowing what you need to be set up to succeed.

Amy: Yes. If you’re working with a manager who never wants to communicate, and you’re a socially-anxious person, you’re going to want your manager to check in with you once a week for probably the first three months, to offer reassurance and guidance. Or if someone has oppositional tendencies, they probably don’t want someone checking in on them every day or every hour. They would want a little bit more freedom.

Andrea: Aha. So learning how to diplomatically know what to ask for, and to be clear about what sort of support and guidance works for you.

Amy: Absolutely. Is this company going to be able to support you successfully? Because even when we feel better, we all still have our issues. And just like anyone else, some people work better with certain management styles than others.

Andrea: Have you found that companies are more open or more accommodating right now, or more willing to have these conversations?

Amy: Yes and no. We work with about 30 different companies. Some are like, “We value neurodiversity.” And then some are like, “I want everyone to be on site and work eight to five.” Some employers are further down the line than others.

Andrea: I’m wondering, are there any suggestions that you might have for job seekers who have had some mental health struggles over the last year or so? What advice would you have for them about like stepping back in?

Amy: I would say the emotional regulation is a big one. And also being brutally honest with yourself, which can be hard. Just because it’s the first job where they called you back doesn’t necessarily mean it’s the right job for you. Job seekers today need to know that they have a lot more power than they did back in 2018. The book is changing. It’s basically unwritten at this point.

Amy: For instance, job seekers with kids. They need to ask themselves, “Am I okay working onsite? What if there’s an outbreak at my kid’s school and they’re home for two weeks? Are you going to lay me off?”

Andrea: Ahh. So candidates want to be reassured that employers can roll with the punches, because everything is up in the air right now.

Andrea: So it sounds like there’s two things that we’re thinking about. If someone is in a place of vulnerability, making sure that whatever situation or environment that they put themselves in is going to be a safe, accepting and good for them. But the second is – I like how you put it, being brutally honest with themselves about the role. Just because this is an opportunity, is it going to be right for me?

Post by Andrea Gerson
September 17, 2021
Andrea Gerson is a social worker, career coach and workforce technology founder. Over the past 15 years, she's crafted impactful resumes for over 7,500 clients – many of who have gotten hired at organizations like Google, Apple, and the U.N. She's partnered with dozens of non-profit workforce agencies to lead staff trainings on topics like job search strategies, interview preparation and navigating workplace conflict. Andrea brings a strengths-based, client-centered perspective, and her work is an extension of her commitment to addressing the opportunity gap.